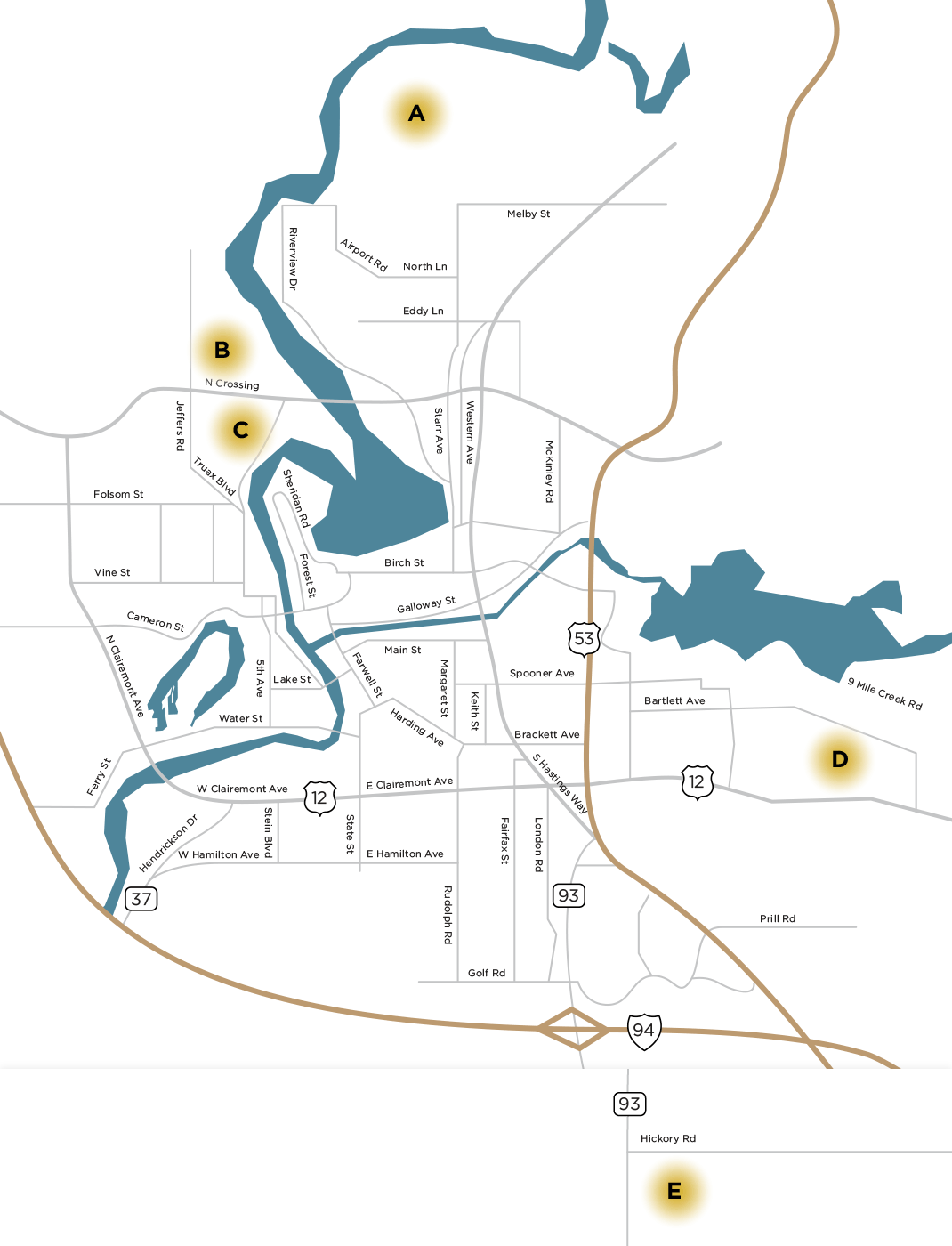 Shortly after World War II, Brian Blakeley’s grandfather constructed a grid of simple dirt roads across some of his farmland on the southeast side of Eau Claire – an area that decades later would hold London Square Mall. He plotted lots and sold the land to young families looking for an inexpensive place to build a home. At the time this property was outside city limits, free of most regulations and zoning laws. But all the same, it was a new neighborhood.

Blakeley – who recently published the first book in a series called A History of Eau Claire, Wisconsin – says that, like most cities, Eau Claire’s original 19th century neighborhoods formed over decades, driven by magnetizing factors such as ethnicity, religion, class, and political philosophy. They were anchored by places like lumber mills, factories, churches, and even cemeteries. Over 150 years, those original neighborhoods expanded and new ones were plotted and built. Through time, the social and economic forces driving neighborhood development have evolved.

The original sub-communities from the 1800s have all but lost their original names and identities. The younger historic neighborhoods near the heart of the city, the ones we can now easily identify, such as the Third Ward, Randall Park, Eastside Hill and Putnam Heights neighborhoods, didn’t form as organically as one might assume. According to Pat Ivory, Senior Planner for Eau Claire’s Community Development Department, these were largely subdivisions built by contractors, just like the new neighborhood projects of today. (In fact, many of the older houses we see now were literally bought from a Sears catalog.) Designed for the most part along a classic grid system and populated by citizens riding waves of economic upturn, the identities of these neighborhoods – their vibes – formed over time. It took sixty or seventy years (the decades of growth following WW II) before they were fully realized.

In terms of personality, it’s hard to compare a new neighborhood to ones that are over 150 years old. But they all start from scratch.

The “Eau Claire Metropolitan Area” (Eau Claire and Chippewa counties combined) is one of the fastest growing metro areas in Wisconsin. Eau Claire was the sixth-fastest growing of Wisconsin’s 72 counties between 2010 and 2017. Much of Senior Planner Pat Ivory’s work is based on Eau Claire’s solid population growth over the past 20 years. Analyzing these trends, Ivory says we can expect Eau Claire to grow by 400–500 people a year for the foreseeable future.

Those people need places to live, and many of them want a house nestled within a good neighborhood.

New neighborhood developments near the outskirts of a city are often associated with (and sometimes blamed for) an exodus of people away from crumbling downtowns and old working class neighborhoods. With good reason – that’s certainly what’s happened across America over the past fifty or sixty years. But is it still the case?

According to Mike Schatz, the City of Eau Claire’s Economic Development Director and Downtown Eau Claire Inc.’s Executive Director, downtown residential vacancy is basically zero. There are waiting lists for apartments. Existing homes in Eau Claire’s older, established neighborhoods are in very high demand. It’s a competitive market, says Schatz, with houses fetching high prices after only days (or even hours) on the market.

People aren’t draining from the city. The city limits are overflowing.

Pat Ivory says Eau Claire does see some infill – small developments built on open land within the city limits – but of course, the majority of new development is along the borders. A conservative count shows at least 10 all-new neighborhood projects are currently in progress.

The Chippewa Valley was not immune to the devastating housing market crash seen a decade ago, but things have steadily bounced back. According to Ivory, the construction of new single-family homes in Eau Claire almost doubled from 2010 to 2017, growing by 93% (almost all of them in new residential developments). The market has especially taken off since 2015.

“When the bottom fell out of the housing industry,” says Christina Thrun, Executive Officer for the Chippewa Valley Home Builders Association, “we saw a decline and stagnation in new developments. Less spec homes were built, and many of the area builders left the industry. However, during the past few years, we’ve seen an increase in the number of developments and a willingness by area builders to take on the risk of a new development.”

These new developments abandon the old grid layout in favor of more interesting curvilinear patterns. When considering new projects, Ivory and his department stresses the connectivity of streets allowing for maximum accessibility and walkability. New developments must jive with the city, with considerations for our emergency services and existing systems.

Besides serving as an indication of economic growth, new neighborhood developments are good for the city as a whole. They spur improvements in infrastructure as connecting roads are rebuilt and repaired, and nearby parks are enhanced.

But the ultimate difference between a few rows of new houses and a real community of neighbors rests in the people who live there. Do they support each other? Do they take pride in the place they live? Are they willing to put in the work to cultivate the necessary relationships to make it happen?

EAU CLAIRE WAS THE

The new neighborhoods featured here are some of those currently in development throughout our area. They offer varying sizes and styles of lots and homes, interesting features, and proximity to established amenities in our community. If you’ve considered building a home, explore this website to learn more about some of the best options out there today.