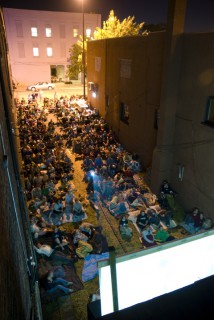 THE BASICS:
The Back Alley Summer Cinema Series is Volume One's Monday-night film series screening classic and out-of-the-mainstream films of all kinds. Movies are shown in the alley that would-be 205 Graham Avenue in downtown Eau Claire, and start at 9:30pm sharp. The space holds no more than 200 people, so show up early for a good spot.

WEATHER UPDATES:
Check back on the website at 4:30pm on the day of a show for the final call on weather-related cancellations.

(see below for descriptions)

TIPS TO ENJOYING THE SHOW:
- Be aware of film ratings, not all films are for everyone.
- Bring a lawn chair or blanket to sit on.
- Bring some cash to buy concessions including popcorn, candy, soda.
- It gets cool in the evening, bring a blanket or jacket, bug spray, etc.

RULES:
- Follow all the standard movie rules: No talking, no cell phones, etc.
- Don't hog space, don't block the aisle down the middle, don't be stupid.
- Under no circumstances may anyone remove their shoes.
- Absolutely no alcohol or illegal substances allowed. Director Steven Spielberg’s sensation that combined his parents’ divorce and love of science fiction as a child, this film follows young Elliot (Henry Thomas), a lonely outsider who befriends an alien stranded on Earth. Along with his friends (C Thomas Howell among them) and siblings (including Drew Barrymore), they help returning the extraterrestrial home while keeping it a secret from adults and the government. (Rated PG, 115 min.) The movie that changed the modern summer blockbuster and started the phenomenon. Indeed, it’s a force to be reckoned with. George Lucas’ futuristic western follows an orphaned farm boy named Luke Skywalker, who is thrust into a rebel movement in space where he must save a captured princess from the evil Darth Vader. Oh yeah, and destroy his epic battle station that threatens mankind. (Rated PG, 121 min.) This most excellent 80s flick launched Keanu Reeves to stardom as half of the heinous duo Bill & Ted, a couple of high school burnouts with an awful rock band (Wyld Stallyns) and failing history grades. Bogus, I know. The only thing that will save them is a radical trip through time, where they borrow historical figures for their final class presentation, and change music forever. Bring your air guitar. (Rated PG, 90 min.) This awesomely over-the-top disaster movie has Helen Hunt and Bill Paxton as a recently divorced couple thrust together one last time to tackle a weekend-long stint of wicked tornadoes. Will they beat the rival team (led by Cary Elwes) to getting a tornado-measuring machine up in the air and changing meteorology forever? Or will it be game over for Paxton & Co. (including Phillip Seymour Hoffman)? (Rated PG-13, 113 min.)