FINISHING
STRONG
IN THE RACE
FOR HOME 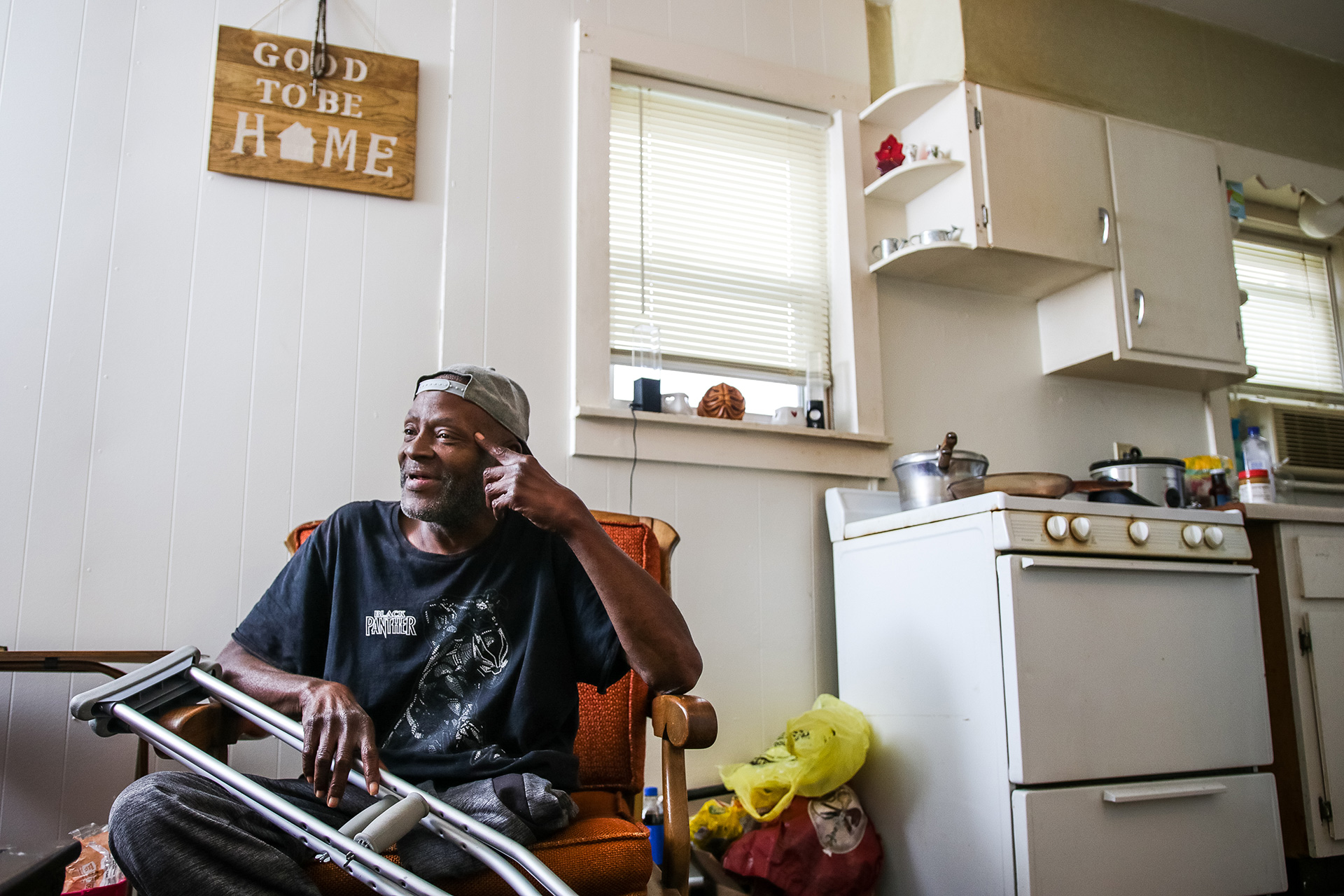 Mark Rhinehardt, who was formerly homeless, is proud of the apartment he obtained with the help of Western Dairyland as part of the Eau Claire Sprint.

Mark Rhinehardt knows the searing heat of spending summer days on the streets, when even a simple glass of water feels like so much more. He knows the frigid temperatures of winter, how subzero air can freeze his outside and make his insides feel frozen, too.

He knows the loneliness that can beset a man after he loses his wife of more than two decades, loses contact with their four children, loses hope, and turns to copious amounts of alcohol to make him forget the pain, at least for a while.

Mark Rhinehardt knows all about the soul-sapping discomforts of life as a homeless man.

– Mark Rhinehardt, who found housing with the help of the Eau Claire Sprint initiative

“It’s been a long time since I looked out a window from inside, from a house of my own,” Rhinehardt, shaking his head, said on the afternoon of Aug. 26 from the modest, tidy apartment along Spooner Avenue in Altoona he has called home in recent weeks. After seven years of homelessness, the past three of them in the Eau Claire area, “I never thought I would have my own place again. I never thought this was possible. Now look at me.”

Last month Rhinehardt became one of 13 chronically homeless people to obtain housing through a new approach. The process – a 100-day effort dubbed the Eau Claire Sprint – began in April and ended July 31. The approach focused on better identifying which chronically homeless residents are most in need of housing, how to work more effectively with landlords, how various agencies can work work together better, and how to bring more resources toward this issue. The term “chronic homelessness: is used to describe people who have experienced homelessness for at least a year – or repeatedly – while struggling with a disabling condition

Erin Healy, a national homeless consultant who oversaw the effort, said the initial goal of housing 16 people was “very ambitious.” And while the sprint fell short by housing only 13 people, those involved with the process nonetheless called the endeavor a success.

“The many people involved with this effort set a lofty goal and then really stepped up to make it happen,” Healy said during a recent interview. “People did a ton of work on this, and that is a big part of why they were able to house the people they did.”

Others involved with the 100-day sprint offered similar sentiments when asked about the results of the effort. Nearly reaching their goal, and subsequently finding housing for three others in that category, represents a significant accomplishment, they said.

“It was really exciting, by the end of this process, to see the success we were having housing individuals,” said Paul Savides, who was involved with the sprint effort. Savides is a member of JONAH (Joining Our Neighbors, Advancing Hope), a local faith-based group that advocates for and works with residents and city officials on a variety of social justice-related issues.

But the Eau Claire Sprint process had value beyond the numbers, those who worked on the endeavor said. “There were new and more players involved in this process,” Eau Claire City-County Health Department Director Lieske Giese said, “and that meant more and new viewpoints and perspectives. … We knew we needed to do something different, and the people involved were willing to think outside the box, to come up with new ideas.” 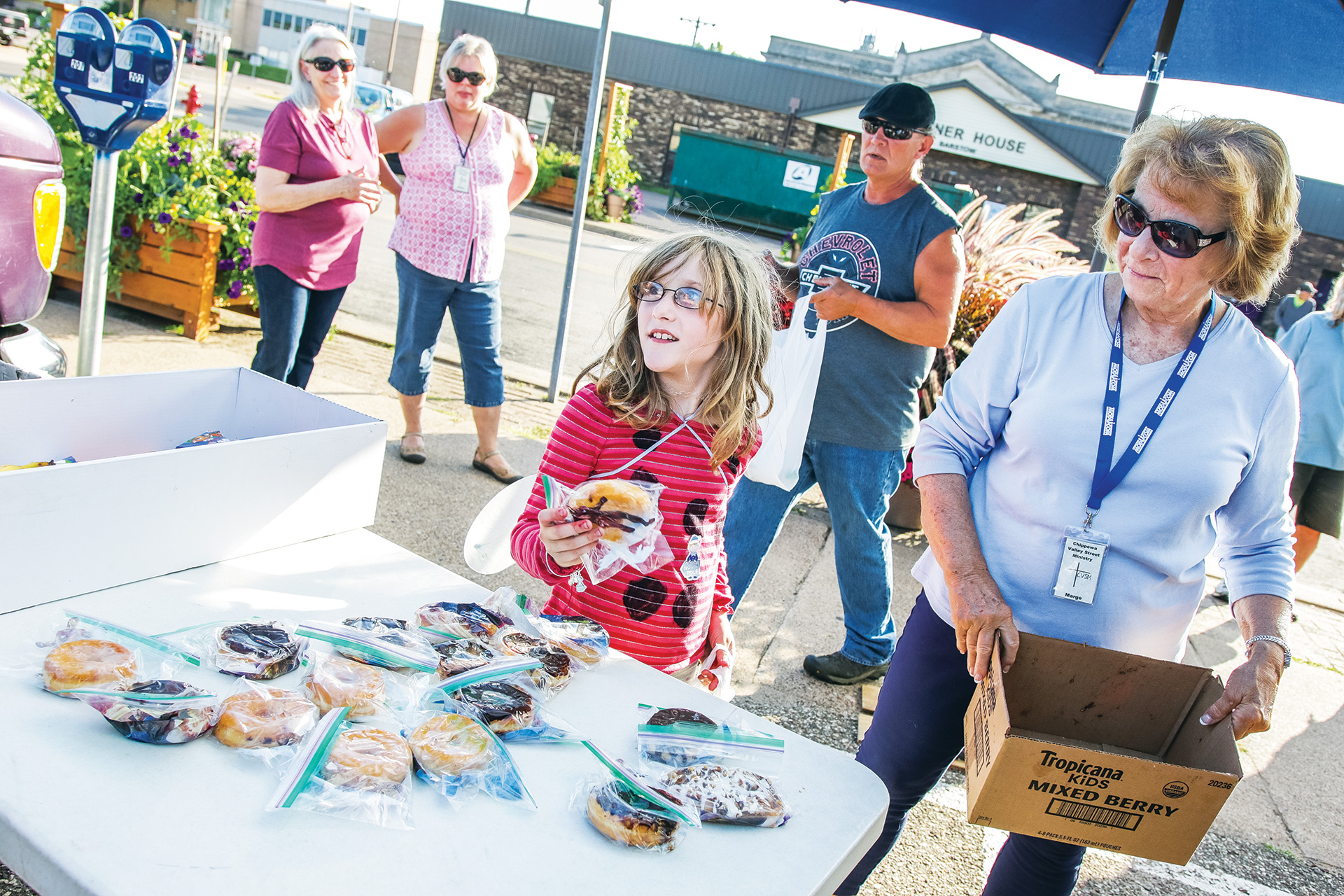 Chippewa Valley Street Ministry distributes food across the street from the Sojourner House in Eau Claire.

Observers say the local homeless population is growing because of a number of factors, including the rising cost of living – especially of housing – and stagnant pay in low-wage jobs. Prompted by this trend, a group of Chippewa Valley officials and others concerned about the situation began discussing a new process last year. Last fall, that group convened to talk about different approaches to homelessness and decided to hire Healy, who had done similar work in about 70 cities nationwide, to oversee that effort. In April they devised a different, more thorough approach to making inroads on homelessness.

After sifting through various ideas for a specific goal of the 100-day sprint, group members settled on trying to house chronically homeless people. Because of the long periods – sometimes for years – those residents have spent without homes, and because of multiple issues many face, housing them can prove especially challenging.

Choosing to address that population made sense, Healy said, given statistics showing chronic homelessness is a significant problem in Eau Claire. When group members decided to try to house 16 of the 31 residents identified as chronically homeless within 100 days, Healy was outwardly supportive. But she was concerned that goal could prove difficult to reach, she said.

“I was impressed that they wanted to take on a big task,” Healy recalled. “They wanted to go big, to try to make a real dent in housing this population. ... But it was a very ambitious goal. I figured from the outset it was going to be a big challenge.”

“How can we create the capacity to keep doing this, to help as many people obtain housing as possible? That is the real goal.”

The sprint was challenging in many ways, those involved said. Finding housing for chronically homeless people is a struggle in any situation, but doing so proved especially daunting in Eau Claire. The city has a rental sector vacancy rate of only 2%, meaning securing apartments for some of the people deemed among the riskiest to rent to was particularly problematic.

Savides was part of that effort. Once chronically homeless residents were prioritized based upon how at-risk they were if they remained on the streets, Savides spent hour after hour contacting landlords seeking some willing to rent to them through the Housing First program operated by Western Dairyland. Response after response offered the same answer: No.

But Savides and others persisted. They called more landlords, then more. Others organized a May 15 meeting of landlords, hoping to convince them to offer rental units to the homeless, with Western Dairyland Economic Opportunity Council guaranteeing rent, security deposits and payment for any possible damages. Bit by bit it worked.

“At first it was really hard,” Savides conceded. “But we kept at it, and some landlords were willing to take a chance. The last couple of weeks, it felt like we had turned a corner.”

The sprint faced other obstacles, too, those involved said. While adding new groups and faces to the effort brought additional resources and ideas, it also complicated the process used to house homeless people in the past. Many of those involved weren’t initially aware of limitations imposed by conditions of grant funding.

Jeanne Semb, Western Dairyland housing services coordinator, praised the commitment of those working on the sprint. The new process was complicated, she said, leading to inevitable communication challenges. But the result, housing 13 additional people, was laudable, Semb said. The new approach has promise as it continues to evolve, she said, noting “the enthusiasm for (those helping with the sprint effort) wanting to help was amazing.”

New organizations combined with a rapid timeline to house people led to difficulties during the sprint process, said Keith Johnathan, executive director of the Eau Claire Housing Authority, which provides subsidized housing to qualified residents. But those growing pains are inevitable and necessary when changing the previous system of addressing homelessness, he said. 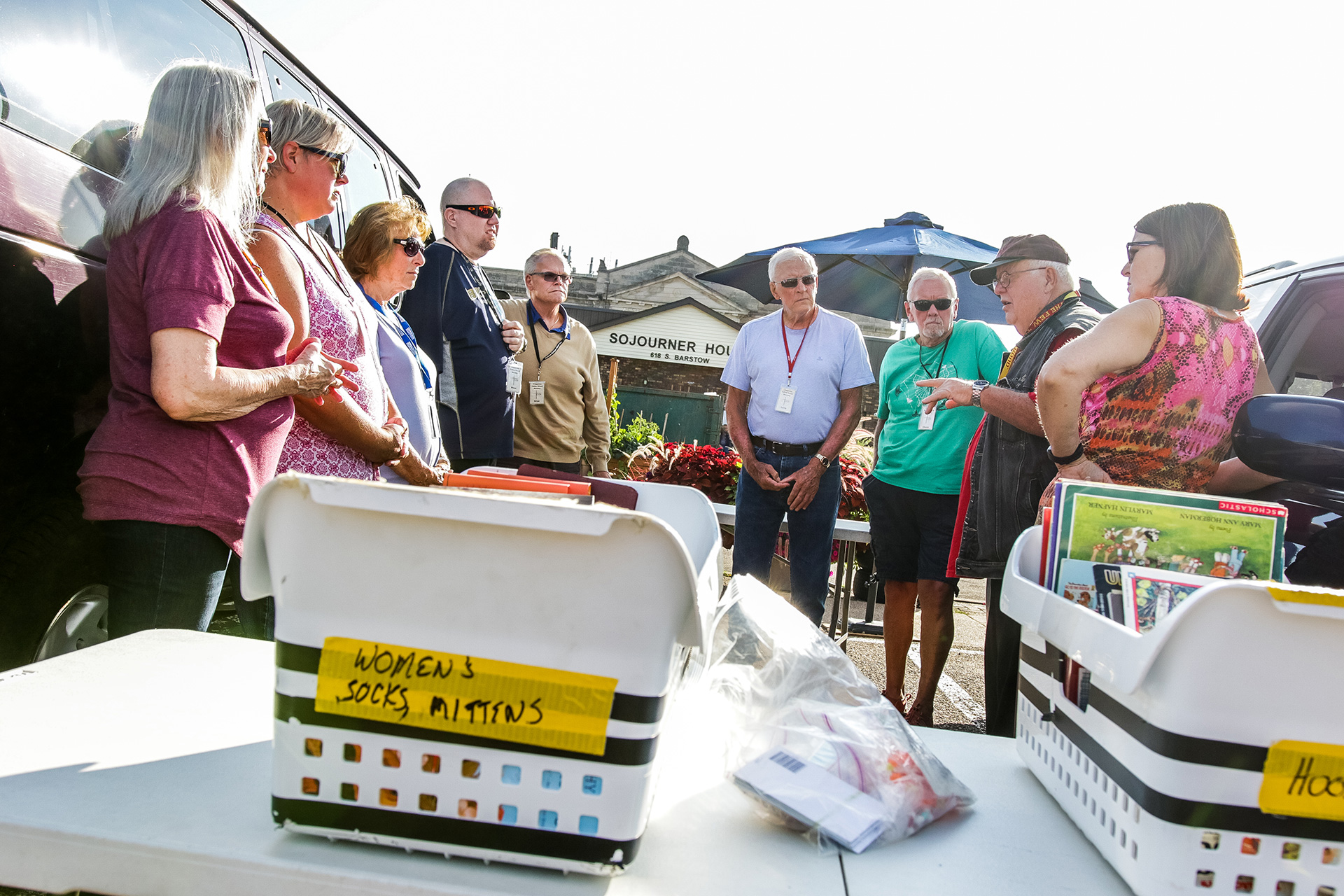 Volunteers from the Chippewa Valley Street Ministry discuss the status of homeless clients across from the Sojourner House shelter in downtown Eau Claire on a recent evening.

The Eau Claire Sprint was designed for a specific goal – to house as many longtime homeless residents as possible in 100 days. But organizers of the effort hope the process will have a more long-term impact.

For years, addressing homelessness in Eau Claire has consisted of finding housing for and providing services to as many homeless residents as possible. Resources were never enough to meet the need, and the city’s homeless population has grown during the past couple of years and has spiked this summer, those involved with providing homeless services said.

Maria Guzman is currently among Eau Claire’s homeless population. The 58-year-old said she once assisted homeless residents in Philadelphia. Now she’s homeless herself in a Midwestern city halfway across the country from the place she called home for most of her life.

Guzman moved to Eau Claire last year to be near her two grandsons. She receives a $925 Social Security check monthly after her husband died, but landlords haven’t been willing to rent to her with that limited income, she said.

“I never thought I would wind up like this. Never,” a teary-eyed Guzman said during a recent night before entering the Sojourner House homeless shelter. “It’s a hard, hard life.”

Challenges during the sprint process will hopefully lead to a more big-picture, multi-pronged approach to better assist people like Guzman, people involved with the effort said. To what degree that will happen remains to be seen, they said.

“Through this sprint, have we created sustainable change? I don’t know the answer to that yet,” Johnathan said.

Healy said she believes the sprint process helped set the stage for improvements in addressing homelessness in Eau Claire. But challenges remain, she said.

Chief among them is a housing shortage that drives up prices and creates a supply/demand mismatch that leaves landlords less willing to take a chance renting to people who were previously homeless. Without an agency such as Western Dairyland operating transitional housing, “we are entirely dependent on (landlords)” in finding housing for clients, Healy said, a factor “that will be a continuing challenge.”

Finding funding to increase rental assistance will be another hurdle, she said, as will continuing to develop new working relationships and compiling more complete homeless-related data.

Those issues and others will be discussed at a Sept. 10 meeting involving people and agencies involved with the sprint process. Participants will review the sprint, Healy said, and will discuss how to best move the effort forward.

“How can we create the capacity to keep doing this, to help as many people obtain housing as possible?” she asked. “That is the real goal.”